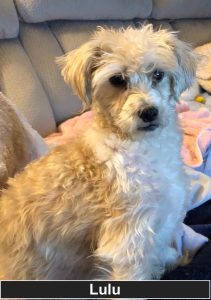 Lulu is a mentally impaired Jack Russell Terrier. An MRI has shown that part of her brain is missing and there is only fluid where tissue should be. Not only is this a challenging situation for Lulu, it’s hard for anyone who needs to work with her, like her vet or groomer.

Typically, Lulu gets so overstimulated and reactive when being handled that she flails and bites and paces in and soils her crate so she was one of Georjeans’ early BEMER candidates.

After her BEMER session, Lulu’s behavior changed dramatically. She stood still on the table, didn’t struggle in the tub, slept in her crate when she wasn’t being groomed and didn’t try to bite even once!

I don’t throw words like “miraculous” around easily … but in Lulu’s case, the change in her behavior after a single BEMER session seemed like a miracle. We couldn’t believe it!

After hearing about the remarkable change in Lulu’s behavior following a single BEMER session, Lulu’s owner, Janice Joslin, told us:

I love Lulu so much, and I know that her groomer, AshLee, “gets” her! That’s why I drive from Gainesville to Georjeans Pet Grooming in Warrenton — because I only want AshLee to groom her.

When AshLee asked me if she could use the BEMER on Lulu, I was skeptical …but when she shared the results I was impressed!