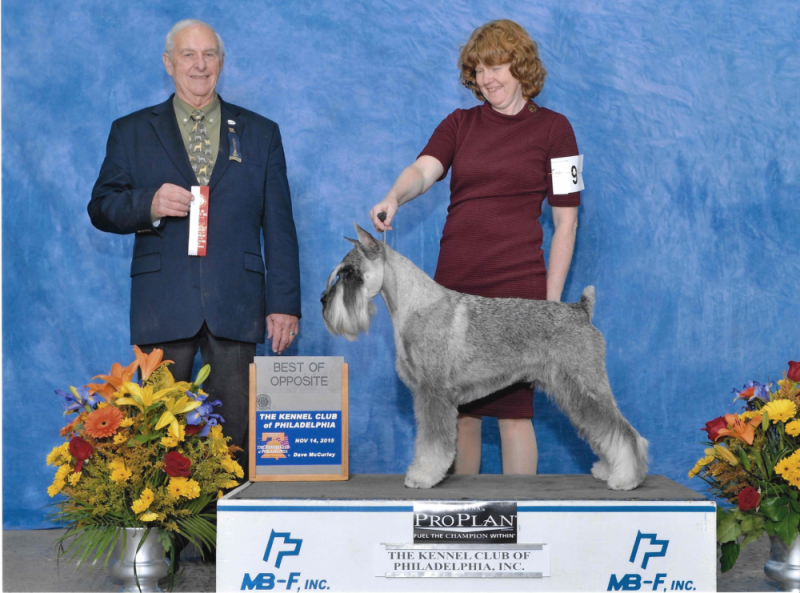 In 2015, Frodo and I competed mostly in “breed” competition, that is, against other standard schnauzers. We showed locally and at important venues in 2015, on the way to his Grand Championship. With only a few “single” points left to earn his title, he’s nearly there with almost all-Major points. To the uninitiated, that means each time he earned points toward his title, it was in blocks of three to five because he won against a lot of other standard schnauzers.

Our May “tune up” was a beautiful weekend at the Mattaponi KC show in Manassas. On Saturday Frodo was awarded Select Dog and his first points toward his Grand Championship

In June we showed at the Shawnee Kennel Club Show in the Shenandoah Valley. We enjoyed a couple of warm days with some mountain thundershowers that kept the dust down outside the show building. We had a lot of fun!

Frodo won Best of Breed both Saturday and Sunday over quite a few other standard schnauzers, earning more Major points for his Grand Championship title. Winning Best of Breed means going on to the Group competition, with a shot at Best in Show. I was so excited that Frodo’s first weekend competing at that level, in his second appearance, he was awarded Fourth Place in the Working Group!

The biggest competition of the year within Standard Schnauzers is the National Specialty, where schnauzers come from all over the US, and sometimes other countries, to compete.

This year the Specialty Show was held close by, in Richmond, VA, in July. What a relief not to have to drive for a day or more to get to the show locations as they move around from year to year.

This year’s competition featured many beautiful schnauzers but there was a special buzz in some quarters about Frodo. His mother’s breeders were visiting from Denmark and they were very pleased with how he was growing up. They gave me some pointers and helped me take some very lovely pictures of Frodo. I’m grateful for my friendships with many people all over the world who share my passion for dogs, particularly schnauzers.

For the National Specialty week, there were approximately 100 Champions competing each day, split fairly evenly between males and females. While Frodo didn’t win any specific awards over the show week, he made it to the “Top 20” cut every day after the first and on the third day he made it to the final cut to the top five males before conceding to the Best of Breed and Select Dog winners. I was gratified we received so many compliments from other standard schnauzer fanciers over the course of the week and I’m grateful there are so many experienced mentors in the breed from whom I can continue to learn.

Every year, in late September, the Warrenton Kennel Club and the Old Dominion Kennel Club host an outdoor long weekend of All Breed Dog Shows. For a number of years now, the shows have been held at the beautiful Long Branch horse grounds near Millwood, VA. Many of the same top dogs from the National Specialty in July were competing here too so I was happy that Frodo was awarded Select Dog one of the days for another Major toward his Grand Championship.

We ended our show year in November, at the National Dog Show in Philadelphia, PA. Highlights of the Group Competition is televised every Thanksgiving Day on NBC, after the parade. This event is a “benched show.” That means that all of the competing dogs must be present all day so that the public has an opportunity to see most AKC breeds during day and speak to the dogs’ owners and handlers.

Everything was going well until complicated circumstances almost kept us from competing but good fortune and good timing saved the day. Given our challenges and that I was the only handler whose career is not showing dogs, I was thrilled that Frodo was awarded Best of Opposite Sex (that means Best of Breed was a female, and that Frodo was the best male). Overall, it was a fun experience, and I’m sure we’ll try again next year to get on television for Thanksgiving!

Next year we will be showing more, finishing Frodo’s Grand Championship, attending the Westminster Kennel Club Show in New York City, as well as our favorite local venues, and trying for more Group-level competition and placements. We might even go to Houston, TX for the 2016 Standard Schnauzer National Specialty.